skip to main | skip to sidebar

i have christmas pics. I DO. i just have to find the camera cord. i can't find it because i'm a disorganized MESS.

i bought some bins (HAHAHAHAHA like that'll help) and i hope to make good use of them this weekend in my cleaning/organizing extravaganza.

what i need luck for isssssssssssssssssssssssssssssssssss... tonight i'm making my first batch of baby food for olivia. everything i've read makes it sound SO EASY and hi, let's be honest here: CHEAP. her formula is wicked expensive (hi, olivia? your college fund went to alimentum. sorry!) so this whole cheap-feeding idea? sounds pretty freakin great to me.

so we took a trip to whole foods last night and stocked up on butternut squash, sweet potatoes, carrots, avocado, apples and bananas. i'm inspired since we switched to the happy bellies oatmeal and she's now OMG GIMME MO! she didn't care for pears (me neither, sister), but loves apples and bananas. (we had some earth's best organic fruit jars to start with).

tonight? avocado! can i give her that and oatmeal? that just sounds gross. i don't know. also? when do i start increasing the times of day she gets food? like, for now, she gets a bottle four to five times a day and food also at one of those times (on the weekend, i give it to her with her second feeding, weeknights at dinner/fourth feeding). when do i start giving it to her more?

and add one more reason to the list titled WHY I HATE WORKING because i have to send food to daycare now. so they can feed her. WA! *i* want to feed her food and watch her cute scrunchy faces!

the crack heard 'round the world...

ok, or just around my upstairs. olivia was HARMED!

this child has been injured twice in her five months and both times to the head. poor bean.

so, we have this wooden sign with olivia's name on it that my friend brought back for her from tanzania. with me so far? do you see where this is going?

i'm rocking her to sleep last night and that fucking sign FELL off the wall somehow and cracked her (and me) on the head. not the flat part, oh no. the edge. the thin, sharp edge. and not, say, on her forehead, but right along the top of her head. you know, the soft spot. we both scream. she starts bawling.

i called the pedi because it was bedtime and i wasn't sure if i should let her fall asleep or WHAT really to do. (fun fact: the other time she was injured, her NICU nurse dropped a CAN of formula on her head. true story.) they asked if swelling was greater than an inch. no. any dents? no. is she acting normal? i guess? is there any fluid coming out of her ears? no. THANK GOD. any fluid coming out of her nose? not any more than usual. can she move both arms and legs freely? yes. any vomiting? no.

they said it sounds like a scalp injury (it bled. WA.) more than a brain injury (holy shit. brain injury. ugh.) and to put her to bed, but wake her in two hours. she needs to be conscious and alert and moving arms and legs. i'm thinking to myself: ok, how the hell am i supposed to get her back to sleep after that? and then wake her again four hours after that.

they said she needed to be close to us, so i slept on the aerobed in her room last night and will tonight, too.

here's the rundown on our night and morning:

she took a bit of effort to wake up at 10:15 and was finally like WTF PEOPLE??? she went right back down in the crib. no rocking even necessary! i've NEVER put her down without rocking. (i don't want to hear any shit about CIO because i'm not doing it. i don't care and have zero opinions on how anyone else gets their own children to sleep so please do me a favor and zip it.)

i woke her again easily at 2:15 by changing her diaper and she gave me the stink eye, so i figured i'd try rocking before i busted out a bottle (she's been sleeping so well, i am terrified of giving her the idea that OOOH i can start waking back up at 2 for a bednight* snack!) and she zonked out on my shoulder in about 5-6 minutes.

the swelling has gone down quite a bit, too. and the cutest thing... when i woke up this morning, she was just staring at me from her crib with the biggest fool smile like, "MAMA! what are YOU doing here?!?!!"


*that is what hunter used to ask for before going to bed when he was little. not a midnight snack, a bednight snack.
it's me, stephanie at 11:04 AM No comments: 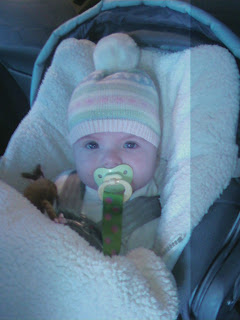 could she look LESS impressed?

so, apparently when you are five months old, your mom is UNIMPRESSIVE. never mind if she puts you in super cute outfits and let's you sneeze all over her (in my FACE people) and on and on. DADDY is where it's at.

oh, she loves her daddy. she'll laugh like a hyena at him all, "HAHAHAHAHAHAHAHAHAHA DAH!" over and over. it's actually insanely cute.

also? she hates food. well, let me offer full disclosure. she does have a sinus infection (yeah, the sneezing in my face sounds a bit grosser now, DOESN'T IT?) and is on antibiotics, so maybe that's contributing. but she is a total fake. she whines for my fork and stares us down when we eat... so on her five-month birthday, we started cereal. she did really well the first try. subsequent tries were all huge FAILS. she shut me down hard. every time.

but look, doesn't she look like she WANTS to eat? you'd think so. but you'd be wrong. 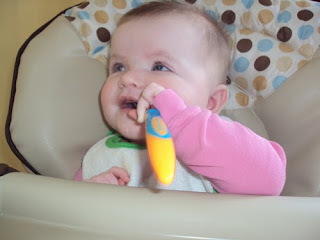 yeah, she's staring lovingly at her dad in this picture. of course!! 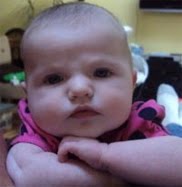 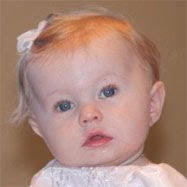